Since I was young, I’ve always had a menagerie. My house has jokingly been referred to as “Arwyn’s Home for Wayward Animals,” since I’ve often acquired creatures of various species. Fun fact: I used to be a hermit crab adopter.

One of the creatures that has often come into my life is the turtle. I’ve had several turtles over the years. Currently I have a painted turtle named Rica, who was rescued from a frat house. She’s my buddy and will soon take part in one of the homeschool classes at Aldo Leopold Nature Center. There are two species of painted turtle in Wisconsin, the Western Painted Turtle and the Midland Painted Turtle. As the name suggests, the true Western Painted Turtle lives in the western (and northwestern) part of the state, while the true Midland Painted Turtle is in the southeastern part of the state. However, the species have been known to intergrade, and so the painted turtle populations found in other areas of the state are likely a mix of the two. For what it’s worth, although Rica was rescued from Dane County, which is an area where I would expect intergradation, she seems to demonstrate more Midland Painted Turtle traits. Her head and legs have red and yellow markings (as opposed to the Western’s yellow), and her marginal scutes demonstrate strong red geometric patterns.

For Mother’s Day, we went to Horicon’s Living History Days, in which reenactors set up camp at River Bend Park. They represent different time periods–often around the Revolutionary War, or 1800s fur trade, but today there was also a German Soldier. It’s educational and fun, and the kids like doing things like making ropes and candles. Since we got done with that a little early, we decided to also go to Ledge Park, but on the way there is a pond, which is part of Osborne Park.  I noticed some turtles basking, and we stopped to take pictures, but I had no idea just how many turtles were there!

Basking is necessary for marsh turtles, like these painted turtles. Since turtles are cold-blooded, their body temperature is highly dependent on their environment. Basking helps their body absorb heat and vitamin D. It can also help rid the turtle of parasites, like leeches or barnacles, as well as algae. Algae likes to build up under partially shed scutes (the plates on a turtle’s shell), which can contribute to shell rot. You’ll often find turtles basking in large groups, called a bale, on logs or rocks in a body of water. In the featured image, I counted at least 16 of them! The image above has six. 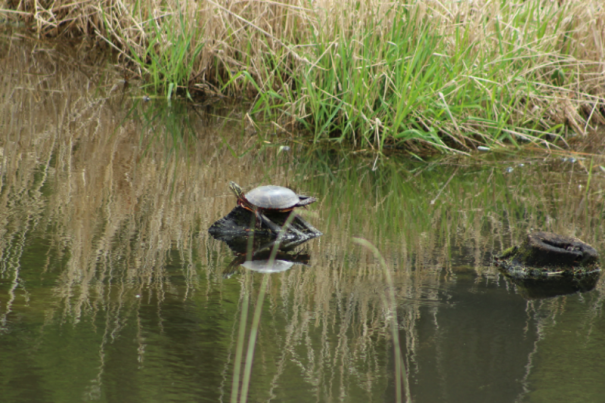 This turtle was also in the same pond, but all alone on its own rock. One of the things that Rica does, that I find absolutely hilarious, is splay her back legs behind her while she’s basking. It’s like she’s trying to get the perfect tan. You can see this turtle doing the same thing! You’ll notice I refer to Rica as a she, but these other turtles as “it.” It’s hard for me to see features in these pictures, but one way you can sex a turtle (at least painted turtles) is by looking at their claws and tails. Males have longer claws and tails than females.

I did also get some more images at Ledge Park, as the trillium was in full bloom, and I found some more yellow violets, but the highlight of my day was definitely these turtles. It’s always a good day when I get turtle or frog pictures.