The Nature of Spring Ephemerals

Ephemeral refers to something that is temporary, short-lived, or lasts for a brief period of time. Ephemeral water bodies, for example, may appear after a snow melt or after a rain. Every spring at Astico, there is a wetland that appears after the snow melts that disappears by summer. This area is important to various frog species, which I’ll discuss in a future post. Spring ephemerals are fickle beasts. They are the wildflowers that are often the first to bloom in the spring, but they may also bloom only for a few weeks. Some flowers, such as bloodroot, are extremely short-lived and last for a day or two. Therefore, observing spring ephemerals requires some amount of diligence.

Two Girl Scout troops joined me for a walk so they could earn their hiking badge. The primary purpose of the hike was to teach them hiking safety skills. Thankfully, some of the greater risks a person might encounter at Astico, like ticks, poison ivy, or poison oak, weren’t a major concern due to the late spring, so I was able to talk about phenology and observation. I discussed some of the trees, wildflowers, and animals around them during a 1-1/2 hour hike that took us through the woods, around the river, and up a paved path. Despite the fact that I had been out roughly 30 hours earlier, I encountered wildflowers I had not seen the day before. One of these was the Sharp-Lobed Hepatica, a member of the buttercup family. 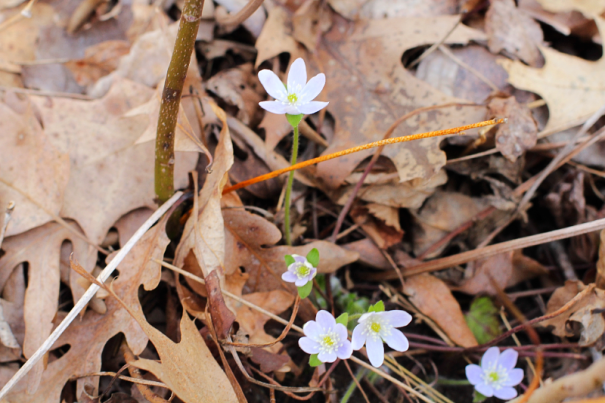 I wouldn’t have noticed the Sharp-Lobed Hepatica before it started blooming, as the flowers appear on long stalks before any new leaf growth. After digging around in the leaf litter, I was able to find some of last year’s leaves, red and withered. The leaves help to distinguish the Sharp-Lobed Hepatica from the Round-Lobed Hepatica which has, as one would assume, round instead of pointed basal leaves and more rounded bracts.

The Sharp-Lobed Hepatica has small flowers (up to 1″) with anywhere from 5 to 12 sepals that are white, pink, or bluish-purple in color. Six is a common number, although some of the flowers I found had seven or eight sepals. There are three green bracts beneath the sepals where one may expect to find a calyx. Stamens are numerous and white in color. The flower appears on a scape, or a leafless stem, which has some fine hairs. The Sharp-Lobed Hepatica is commonly found in deciduous woodlands. Hepatica colonies may bloom for just a few short weeks, with individual flowers lasting for a much shorter time.  Additional research from Go Botany (https://gobotany.newenglandwild.org/species/anemone/acutiloba/) suggests that the Chippewa used the roots of the plant as a charm for mammal traps, and the Iroquois used the plant to relieve shortness of breath in forest runners.

My first official event as the Dodge County Parks naturalist is Saturday, where I will assist with the tours of Nitschke Mounds for the Natural Resources Foundation of Wisconsin field trip, which is followed by a tour for the Friends of Dodge County Parks. I was asked to provide some information on native flora, but from what I heard, there still isn’t much up in that area (not that Astico is faring much better). At any rate, I should have some interesting information about the mound builders to share.