After the last snowfall melted, I thought I’d be able to put my coat away. A wake-up temperature of 39 degrees Fahrenheit suggested otherwise, despite the bright, sunny day.

I arrived at Nitschke Mounds at about 9:45, and the first tour started at 10:00. Kurt Sampson, the museum curator for the Dodge County Historical Society and an archaeologist specializing in effigy mounds, gave a presentation before the tour.  Kurt also heads the Effigy Mounds Initiative, which he took over from Don Gehrke, who passed away this past year. Don had done a lot of restoration work at the mounds, so there is now a memorial trail named after him.

I can’t begin to give justice to the presentation from the notes I took, which encompassed 4 pages. In short, there are 39 preserved effigy mounds at the park, which were believed to be constructed during the Late Woodland Period from around 800-1100 A.D. There had been more mounds at the park (previous research suggests 62 known mounds, and possibly up to 100), but some had been destroyed by agricultural practices. This destruction isn’t uncommon. Indeed, out of approximately 43,000 mounds that had been constructed in the United States, only about 3200 remain, and 1500 of them are in Wisconsin.

The Native Americans who constructed the mounds were nomadic. They summered in Wisconsin and wintered in Iowa. Many of the mounds are in animal shapes, which are thought to represent spirits of the upper world (air) and the lower world (earth and water). Many of the mounds at Nitschke are water spirits. These were aligned with the Path of Souls, or the path the Milky Way takes across the sky.

We went on the tour of the mounds, and my job was to discuss the plants on the walk. Unfortunately, it was cold, so not much was out yet, but there was enough to talk about. The superstar of the day was the Trout Lily. 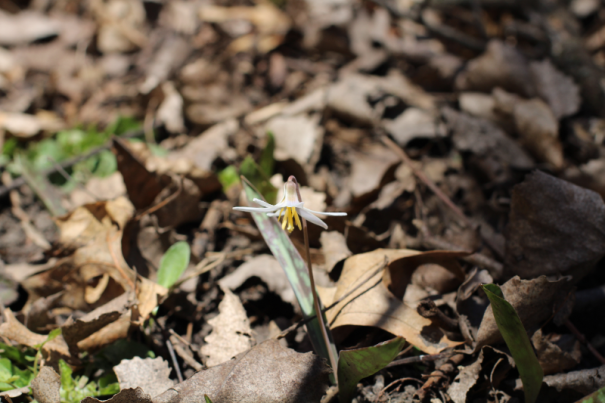 The Trout Lily was one of the few species I could talk about. The leaves were all along the trail, and I used my field guide to show the tour attendees what the flower would look like if it would bloom. I told the members that I was pretty sure that Nitschke Mounds had white Trout Lilies, as that was the type at Astico–and then we found this one.

There had been some great debate over certain bird species. I didn’t take any pictures during the first tour, as there were 24 attendees on that one. However, the second tour had only 3 attendees, so we spent a lot more time over by the birds. One of the shorebirds there were questions about was this one. 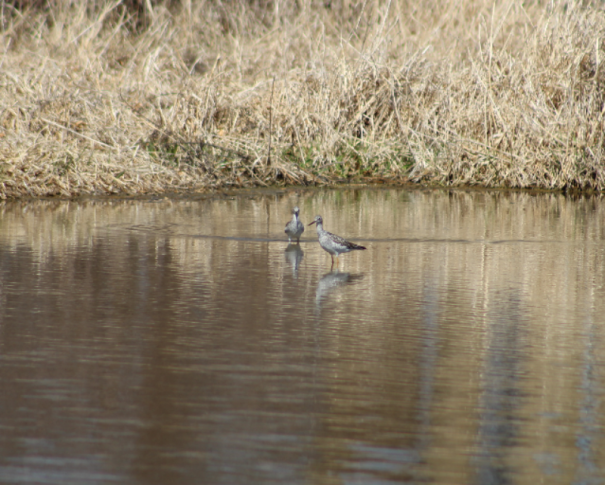 I believe these to be Greater Yellowlegs, although it’s possible that they are Lesser Yellowlegs. Other images suggest a longer beak than what is seen here, and that is one of the features that differentiates the two species. These are migratory birds that are just passing through. Without seeing the legs, it was difficult for the first tour attendees to identify the bird. Truthfully, I am just learning my birds as well, and if I am encountering a new species at a different location I’m typically at a loss. However, during the second tour the birds were closer, and I was able to take pictures that showed the birds did have the trademark yellow legs.

The other bird attendees were questioning was the Yellow-Rumped Warbler. One of the attendees thought she saw some blue and yellow on the bird, but I think maybe she had also seen the Tree Swallows and assumed they were the same bird. That handsome fellow is the featured image for this entry.

Plant species I was able to identify during the tours were the aforementioned Trout Lilies, Virginia Waterleaf, Mayapples, Garlic Mustard, and wild cucumber. Unfortunately, the garlic mustard has taken over the park. Looks like I’ll be scheduling a lot of removal days in the future.