I really didn’t intend on taking so long to write a new post, but life sure caught up with me. Cancer diagnoses (multiple family members, including myself)! Job loss! Car breaking down! A month and a half of constant headaches and migraines after surgical complications! It’s been a tough time. Regarding my own cancer diagnosis, it was cancer in situ, so noninvasive, but we really need to pay attention to it.

Last time I posted I promised a photo dump, so that will be following. The images will be from  a May 26th trip to Astico. Since the promised photo dump, I also took more pictures of frogs. I do need to get out and take some pictures of the chanterelles and wild black raspberries, but the mosquitoes are vicious, and I don’t care to be their next meal.

Jack-in-the pulpit has a light green spadix, the “Jack,” that sits within a green-to-purple striped spathe, or “pulpit ,” which curls over the “Jack.” It’s a little hard to see Jack in my image, though.  Plants can be male or female, and they can switch gender from one year to the next depending on reproductive needs. Like hepatica, the flowers emerge before the leaves, which are trifoliate and sometimes confused with the trillium. The plant is generally considered inedible, as the calcium oxalate found throughout the plant causes a burning sensation. However, Native Americans ate the corm and, if properly dried or cooks, the corm is edible. Jack-in-the-pulpit will produce red berries later in the year.

Wild Geranium has five-petaled lavender flowers, sometimes appearing almost white. The leaves have 5-7 lobes, which are deeply toothed. The name “Cranesbill” has also been associated with this plant, . The genus name Geranium comes from the Greek geranos, or crane, and refers to the long, narrow shape of the seed capsules, similar to a crane’s bill. These can grow quite abundantly, as you can see, in moist to dry woods. The plant is known as an astringent, and the root has been used in tea for toothache relief.

Fleabane, or daisy fleabane, is one of the plants I tend to forget the name for. I keep wanting to call it an aster. It is indeed a member of the aster family, at least. I tend to find this plant in somewhat disturbed areas at Astico, and otherwise in fields. The flowers are small, pink or white, with up to 40 petals. The name fleabane comes from the idea that the dried flowers could be used to keep away fleas. There isn’t any truth to that, but starlings have used the plant in their nests to keep away mites.  I recently went to an ethnobotany course, and it was explained that fleabane was used by Native Americans in an incense to ward off head colds. 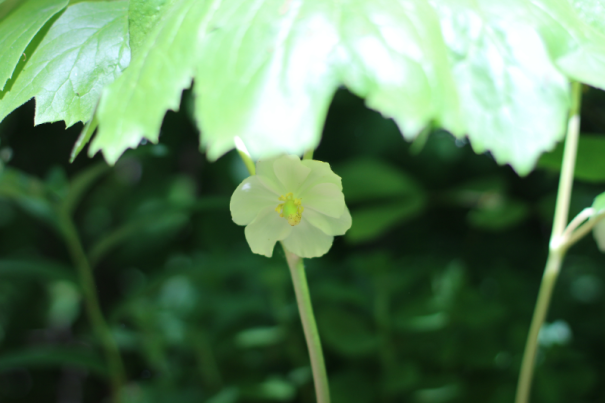 The Mayapple flowers are now long gone, replaced by a yellow-green fruit that won’t be ripe for a while yet. I’ll probably make a whole post devoted to Mayapples at some point, because there is a lot to say about them. The single, white flower only appears on the two-leaved plants, not the single-leaved. All plant parts of the Mayapple are toxic except for the ripe fruit, and even then, care must be taken when consuming. An extract of the plant is used to treat genital warts, and the plant has also been used to treat various forms of cancer.

Many people get Wild Blue Phlox confused with an invasive species, Dame’s Rocket. I’ll discuss those differences in a future post as well. The color of Wild Blue Phlox can range from almost white, like these, to bluish-violet, and I’ve read (but not personally witnessed) reddish-purple. The five petals fuse to create a slender tube, which houses five stamens. Phlox requires cross-pollination to seed. Butterflies are the best pollinators for this plant, and Wild Blue Phlox is prized for its butterfly and hummingbird attraction, which has resulted in its use in gardens. This plant is of the subspecies laphamii, which does not have notched petals. The subspecies divaricata has notched petals but is not, to the best of my knowledge, found in Wisconsin. 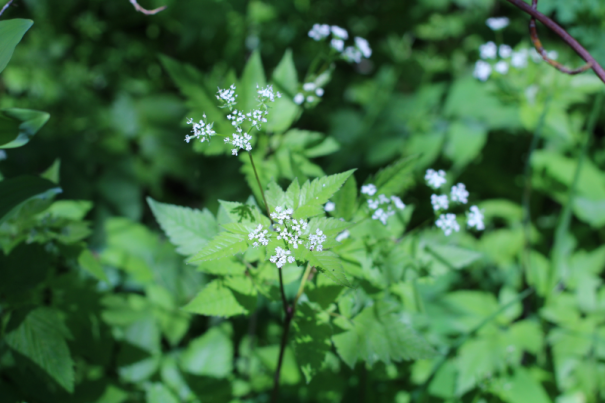 The last image in this photo dump is of Aniseroot, which has been a rare sight for me, as it doesn’t appear to be well-documented in our area. The name comes from the anise scent that comes from the root and crushed leaves and stems. It can be difficult to differentiate this from Sweet Cicely, a mistake I have made. Aniseroot has longer styles, which are somewhat visible in this picture, and the stems are less hairy.

Hopefully there won’t be a month-long break before my next post!